The winning streak continues after a dominant away performance...

MK Irish strolled to a dominant 6-1 victory away to Enfield Borough on Saturday afternoon, as the winning streak stretched to six games.

Defender Scott Dummett opened the scoring after a scrappy start to the game, before George Shrieves doubled the away sides lead through a wonderfully struck free-kick.

Against the run of play, it was Enfield who scored next as a hopeful strike from distance managed to beat Owusu, who had very little to do all afternoon.

The one goal advantage at the break didn’t do the Irish performance justice, as they had limited their opposition to nothing but shots from distance, and as the second half began the visitors stamped their authority on the game as the goals began to flow.

Mason Spence made it 3-1 after turning his man on the edge of the box and smashing it into the top corner, before two quick fire goals from Shrieves made it 5-1 and completed the attacker’s hat-trick. Spence also finished off the scoring with 15 minutes of the 90 left, latching on to a long ball and rounding the goalkeeper high up the pitch to leave himself with the easiest of finishes.

Irish started out on top and the visitors almost took the lead in unlikely fashion after just a minute, as Liam Smyth’s deep delivery from a free-kick had the Enfield goalkeeper scrambling to cover the post as it went just wide.

As Enfield struggled for possession early on they often resorted to giving away cheap free-kicks, fouling Irish players in order to stop them building any momentum.

The windy conditions were making it difficult for either side to get into a passing rhythm, with chances near enough non-existent after 20 minutes of play.

In fitting style for how the opening stages had played out, the first real chance in the match had a scrappy feel to it too, as a quick one-two between Mason Spence and George Shrieves ended up bobbling around the box and needed poking behind for a corner by an Enfield defender to avert the danger.

The resulting corner was crossed in towards the near post by Spence, where Shrieves met it and headed down well forcing a save from the keeper, which he could only push back into the danger area where Scott Dummett was waiting to tap home his second goal of the season and make it 1-0.

As the conditions got worse following the opener and the rain started falling, Irish started looking better and had began stringing some good passages of play together.

Some good link up play by Spence and Shrieves again saw a potentially dangerous move cut short by another foul, this time right on the edge of the Enfield penalty area. Shrieves stepped up and curled it into the bottom right corner in trademark fashion after scoring so many last season.

George Shrieves fires the free-kick in to make it 2-0.

That meant that almost out of nowhere, MK Irish found themselves 2-0 up in what had been a game where neither side had forged any clear cut chances.

Shortly after Irish doubled the lead, the trend of goals from absolutely nowhere continued as Enfield got one back. A hopeful shot from distance, the most the home side had managed to get out of the first half up to that point, finally paid off as Owusu was beaten by the bounce of what was a poorly struck effort.

That gave the home side hope going into half-time, however both sides would be looking for improvement after the break as the game seemed to be calling out for a side to get a hold of the ball and control proceedings.

Similarly to the first half it was MK Irish who started stronger in the second period, as they looked to build on their goal lead and secure the three points. Spence had a chance to make it three with less than two minutes on the clock, after losing his man in the middle and waiting for a Shrieves cross in from the left, however the attacker couldn’t convert from close range as he turned it wide.

The visitors were unlucky not to be awarded a penalty soon after, as Shrieves made good progress down the left-hand side, driving into the box past defenders before being clipped and taken down in everyone’s opinion apart from the referee, who signalled for a corner.

Still in the opening stages of the second half, Irish didn’t let the third chance to make it 3-1 get away as Spence capitalised on a mix-up in the Enfield back line to pick the ball up on the edge of the box with his back to goal, before spinning his man and turning onto his right foot to whip it beautifully into the top corner. The Enfield goalkeeper could only stand and watch as it went in to give Irish a two goal lead to protect again. 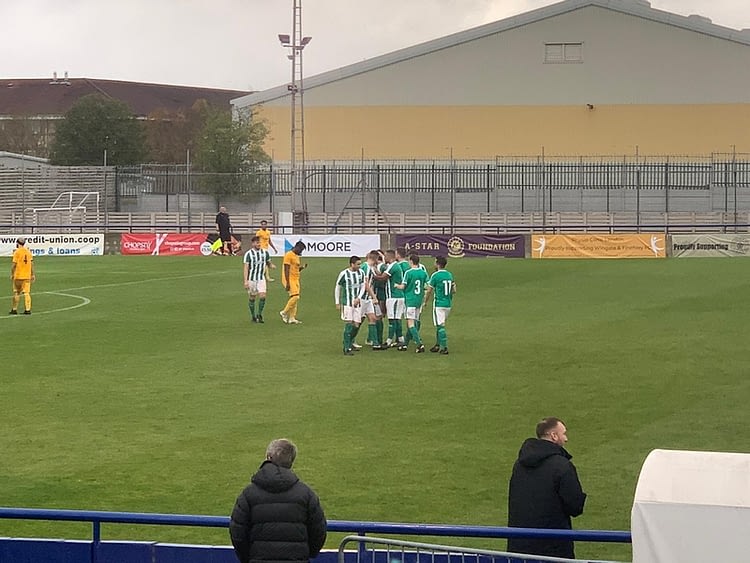 Just after the hour mark Liam Smyth went close to extending the lead, after a smart short corner from substitute Shane Uings was cut back to the midfielder on the edge of the box, who’s low near post effort came back off the woodwork.

The next five minutes of the game saw MK Irish step it up a notch and well and truly kill the game off.

Notching his second of the afternoon was Shrieves, who found space round the back of a poorly organised Enfield backline before being played in over the top by Smyth, who clipped it in perfectly leaving the attacker with space and time to take a touch and convert with ease to make it 4-1.

Two bits of lacklustre defending seemed to result in the home sides’ heads going down, as less than two minutes later it was 5-1. It was that combination again as Spence and Shrieves linked up brilliantly to see the latter go through on goal and round off his hat-trick with a confident finish.

The Enfield defensive misery was compounded with 15 minutes left of the game, as one simple ball forward saw Mason Spence through on goal, before the goalkeeper was inexplicably rounded by Spence more than 40 yards out of his goal, leaving the Irish attacker with the simplest of tasks to take the ball forward and finish into an empty net for 6-1.

The final stages of the game were fairly uneventful as the away side eased to a comfortable victory. The emphatic victory sees the Irish up to second in the table, three points off leaders Shefford Town & Campton with a game in hand.

The coming week presents another two fixtures for MK Irish, in continuation of what has been a congested start to the season. Terry Shrieves’ side travel to Buckingham Athletic on Tuesday night to face a side who have also started well and are level on points with Irish. Saturday brings the first round of the FA Vase to Manor Fields as the boys come up against Stansted as they bid to keep the cup run going.