Irish advance to the second round of the FA Vase...

MK Irish are through to the second round of the FA Vase after beating higher level opposition in the competition once again, in a 2-0 victory at home to Stansted on Saturday.

Midfielder Shane Uings opened the scoring for the home side early on after what had been a balanced start to the game, as his cross bamboozled everyone and ricocheted off the woodwork and in to the net.

Terry Shrieves’ side were rarely troubled throughout the game and in the early stages of the second half they doubled the lead through Mason Spence, who nodded in a deep Liam Smyth free-kick to set the Irish on their way to the second round.

As the game began the pace was almost frantic straight away, with both sides keen to make a quick impact on proceedings.

With just over ten minutes on the clock and both Irish and Stansted looking threatening going forwards, a dangerous outside of the boot through ball from Keelan Shand needed turning behind for the home side’s first corner of the game.

The resulting ball in was cleared by the first man and fell to Shane Uings out wide on the right, who’s clipped cross into the box beat everyone and flew in to the net off the post to make it 1-0 to the Irish as the travelling Stansted fans fell silent.

Irish pressed on well following the opening goal and the confidence of every player on the ball was noticeable off the back of six wins on the bounce, passing it around well and looking assured in possession.

Since looking dangerous in the early stages, the visitors were now struggling to create anything notable at all, resorting to long throws and direct balls forward to try and forge any sort  opportunities. 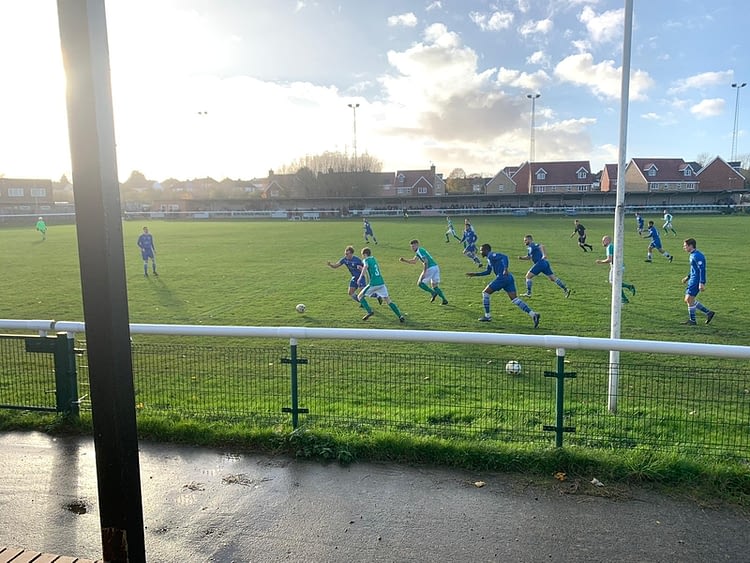 Keelan Shand tries to make progress down the left

After going in 1-0 to the good at the break, Terry Shrieves’ side found things harder to come by after the break, as Stansted came out stronger which was to be expected from higher division opposition.

With the visitors holding the majority of the ball in the first stages of the second period, MK Irish made the most out of one of the rare opportunities they had to get a ball into the box and doubled their lead against the run of play.

Liam Smyth whipped a ball into the box from a deep central free-kick, which dropped in perfectly over the defence for the waiting Mason Spence, who had time and space to measure his header into the bottom corner and make it 2-0.

Despite being two goals down the visitors rarely threatened Owusu’s goal, with the majority of their chances coming from set-pieces or long balls, and a corner 15 minutes from time led to a header straight at the keeper which was easily saved.

The final stages of the game saw Irish continuously defend expertly from long balls and aerial threats, as Stansted looked for a route back into the game late on, but to no avail as Irish’s clean sheet remained intact as it finished 2-0.