A tough test results in a brilliant Irish victory...

It took until early in the second half for the game to come to life, as Mason Spence opened the scoring from the penalty spot for the home side after what had been a first half of very few chances.

Just a few minutes later Irish doubled their lead through George Shrieves, who exploited the space in behind the Salamis defence and finished well under the keeper.

The visitors hit back against the run of the play with 15 minutes left, heading in from a corner to set up a tense finish that MK Irish managed to hold out and claim the victory.

Irish appeared to be set up differently to the shape used by Terry Shrieves earlier in the season, perhaps to increase the numbers in midfield ahead of what was set to be a tough game.

Both teams made their intentions clear from the offset, as Irish were patient in their build up play and were keen to have the majority of the ball, whilst New Salamis, in contrast to last season, looked long almost every time they could.

The early stages were tight and tactical, taking 20 minutes for the first chance which fell to the visitors. The Salamis winger crossed the ball in from the right-hand side, finding an attacker free in the middle, who could only direct his header over the bar.

With 25 minutes on the clock, MK Irish attacker George Shrieves really should have opened the scoring after a chance that came out of nowhere. A long ball forward by Owusu was flicked on by Mason Spence, going right through the defence where Shrieves was running clean through on goal, however he could only fire his effort over the bar.

In a game where chances were few and far between, New Salamis were unlucky to not be awarded a penalty ten minutes before half time. A loose touch from Liam Smyth dropped to an attacker in the area, who seemed to be brought down after taking a touch, yet the referee waved play on and let Irish off the hook. 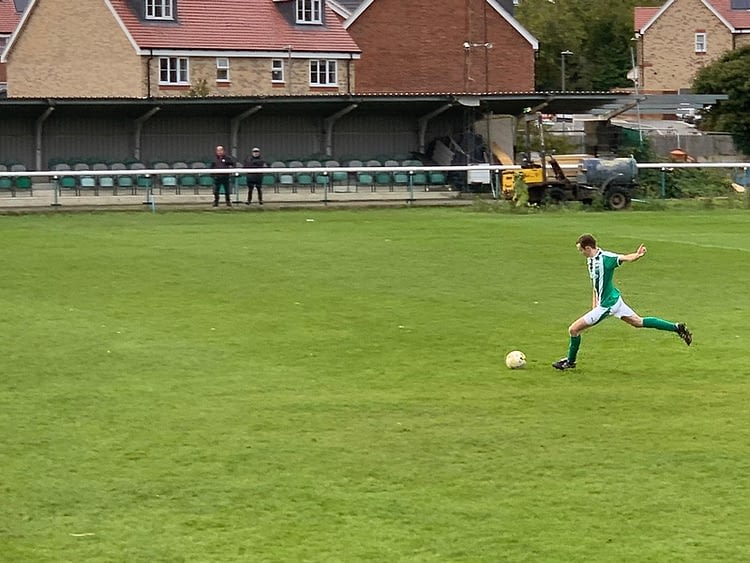 As the second half began both teams would be keen to have more in the way of goalscoring chances, and New Salamis almost broke the deadlock just two minutes in. A hopeful long ball forward resulted in a defensive mix up that saw Owusu come out of his goal to try and claim it, before the Salamis attacker ghosted in and stretched to poke the ball into an empty net – thankfully it rolled just wide.

Five minutes into the half, Irish were presented with the perfect chance to open the scoring. Keelan Shand played a ball down the line that George Shrieves ran on to, getting the wrong side of his man who could only bring him down as the referee pointed to the spot. Mason Spence stepped up and made no mistake as he confidently converted into the bottom right corner.

After 50 minutes it had definitely looked like a game where the first goal could be decisive, and even more importantly the home side gave New Salamis no time to react at all before doubling their advantage. Similarly to the penalty decision, Shrieves latched on to a ball over the top and touched it down brilliantly before bearing down on goal and converting well under the keeper.

Irish had their tails up now and seemed to have identified a pocket of space in behind the Salamis right back, and Shrieves almost exploited it again in pursuit of a third goal. A quick counter attack saw Spence and Shrieves exchange some neat passes that released the latter down the left, where he drove to the byline and cut it back right across the face of goal, yet no one could get on the end of it when it only needed a touch.

Shrieves in particular was looking dangerous now, and almost made it 3-0 in spectacular fashion, cutting in from the left-hand side onto his right foot and whipping one just over the bar.

Comfortably against the run of play and with just 15 minutes left, New Salamis made sure Irish were in for a tense finish to the game as they made it 2-1. A corner from the left was crossed in deep towards the back post, beating the Irish defenders before it was nodded home from close range.

That goal completely changed the tone of the game, as the visitors grew in confidence and looked much better on the ball as they looked for an equaliser. It was now all about the rearguard action for Terry Shrieves’ side, as they tried to close out what would be an impressive victory. 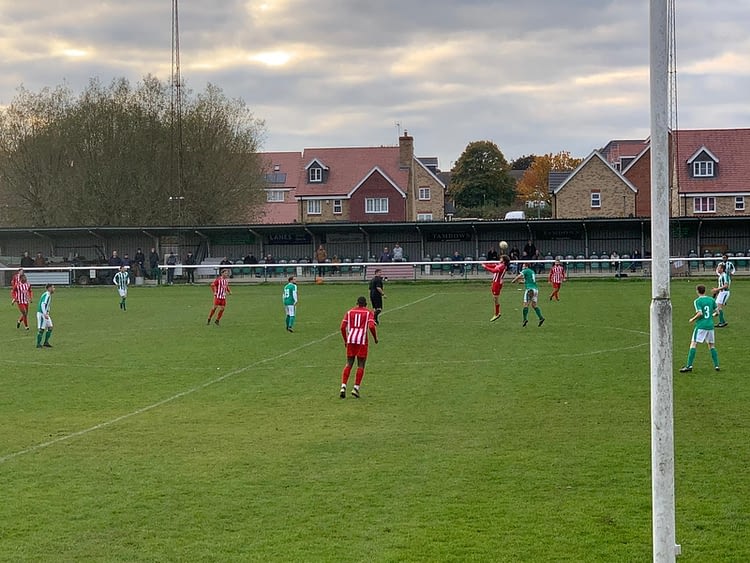 Despite the continuous Salamis pressure, the MK Irish defence stood more than firm until the final whistle and limited the away side to very little in the closing stages other than long spells of possession and hopeful hooks into the box

The result represents a massive victory for the Irish, ending New Salamis’ unbeaten start to the campaign in a fixture they lost 5-1 last season – showing the progression the side has made in that time. The win means Irish sit six points behind current joint table toppers Buckingham Athletic and Shefford Town & Campton, with two games in hand that could see them go level points.