Irish draw from behind in the heat...

MK Irish and Old Bradwell shared the spoils on Saturday afternoon at The Irish Centre, drawing 2-2 on a hot and humid afternoon.

The visitors took the lead before an MK Irish resurgence after the break, as the home side went 2-1 up before being pegged back to see the match end in a draw.

The fixture represented what would’ve been last season’s SSML Challenge Trophy Final, but wasn’t exactly played out at the same intensity that the final would have been.

The game started in a slow pace as both teams had players down with knocks early on, with Irish maybe beginning to feel the effects of their third game in a week.

After 20 minutes, Old Bradwell took the lead in brilliant fashion, catching MK Irish on the counter and laying the ball off to the edge of the box for an on-rushing attacker to sweep it off the post to make it 1-0.

Following the opener, the remainder of the first half passed without much drama, as both teams struggled to hold onto possession for extended periods.

As the second half began, so did the action as the goals started to flow at The Irish Centre.

Scoring his second friendly goal so far, Seyi Olu quickly equalised after the restart, latching on to a through ball from Liam Smyth and finishing to make it 1-1.

Similarly to the midweek victory against Totternhoe, Irish looked sharp after getting themselves on the scoresheet and they didn’t wait long before taking the lead.

Mason Spence and Luke Gardener worked a short corner well, leaving Spence with time and space to measure a cross into the box and find Christian Beaupierre, who glanced the ball into the far corner nicely to make it 2-1. 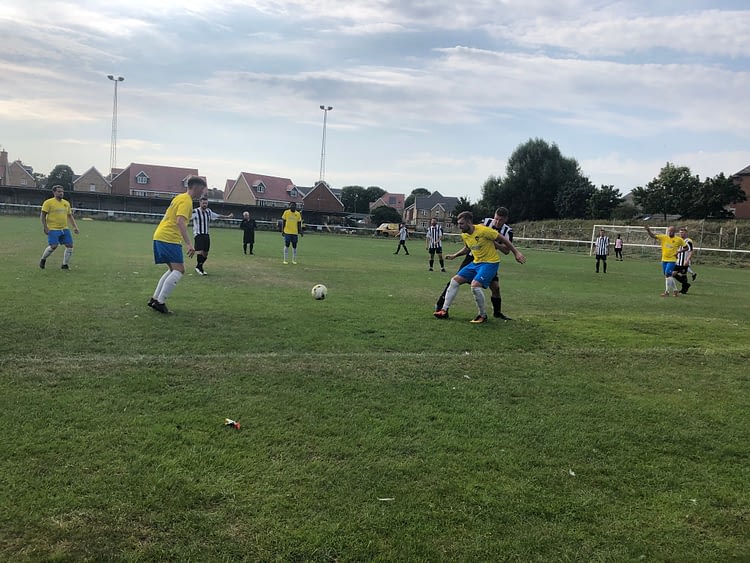 Alex Filip holds off his man in the second half

Continuing the flurry of second half strikes was an Old Bradwell leveller, as a defensive from Irish left the opposition with an easy chance, as one attacker played the ball across the face of goal for the other to finish.

Despite a second half that brought three goals, overall, the game lacked pace and intensity for the majority of the afternoon, with Irish’s third game in 7 days likely playing a part as the legs started to feel the effects of preseason.

Not a victory to add to the previous two, but the game gave the squad the chance to add more of those all important miles in the legs, as the start of the season gets closer.

The boys will be back in action next Saturday, as they welcome Aylsebury United to The Irish Centre in another friendly.