MK Irish were goal hungry again in their second friendly ahead of the new season, beating Totternhoe 4-1 at The Irish Centre on Tuesday evening.

Striker Mason Spence added to his goal at the weekend by scoring a hat-trick, whilst fellow attacker Vinny Shrieves also found himself on the scoresheet again.

In contrast to the weekend’s fixture against Kempston, the first 15 minutes against Totternhoe were scruffy, as both sides struggled to get a hold of the ball, which spent a lot of time in the middle of the park.

Terry Shrieves was forced into two early changes in the first half, as Ryan Coyle and George Shrieves were forced off through injury after 20 minutes – thankfully both only looking at week-long layoffs.

Irish struggled to create chances early on, finding it difficult to get the ball down on the turf and playing, often looking for more direct passes.

After 28 minutes the home side were behind, as the visitors took the lead with a volley from the edge of the box, hitting the crossbar before going in – leaving Owusu Kyerametang no chance of stopping it. 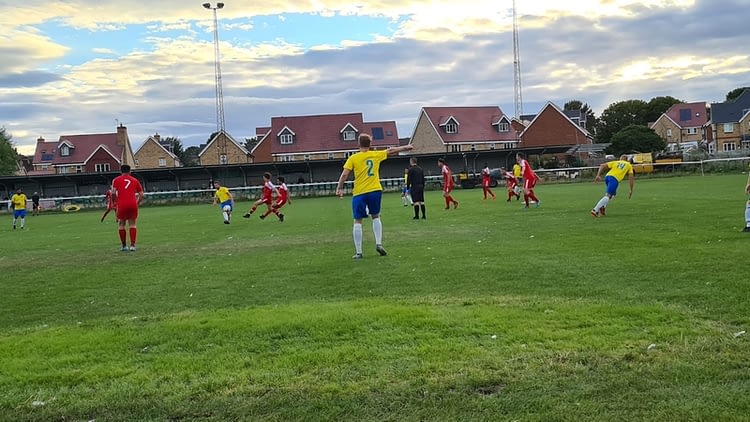 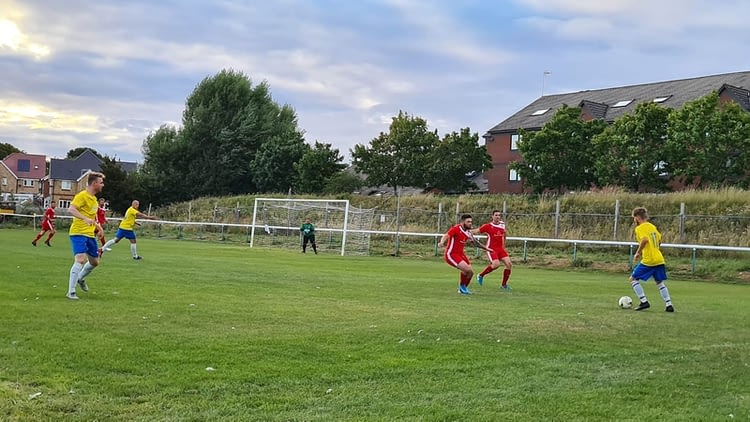 Manager Terry Shrieves will have been pleased at his sides response, as the opening goal seemed to click Irish into gear and it wasn’t long before they were playing some better football.

Striker Vinny Shrieves had a goal disallowed for offside, which looked a very close call, however it didn’t matter for long as MK Irish soon found themselves level.

Luke Gardener picked the ball up on the right wing, whipping it into the box for Seyi Olu to head towards goal. The keeper made a good save but spilled it for Mason Spence to equalise.

Encouraged by the leveller, Irish didn’t let up and three minutes later a ball over the top had Olu sprinting through on goal, where he beat the keeper to the ball, was brought down and won a penalty.

Doubling his tally for the evening, Spence stepped up and calmly slotted the ball to the keepers left.

Mason Spence converts from the penalty spot to make it 2-1.

The Irish started the second half strongly and quickly extended their lead through Vinny Shrieves, scoring in similar fashion to his goal against Kempston, heading in off the post after 51 minutes to make it 3-1.

The scoring was wrapped up soon after, as Olu played a great through ball to Spence who calmly slid the ball round the on-rushing goalkeeper to make it 4-1 and complete his hat-trick.

The result means that Irish have won both of their pre-season games so far, in encouraging fashion too, scoring eight goals in the process.

The squad will report for training on Friday ahead of another home game this Saturday, against who would have been the cancelled SSML Challenge Trophy Final opponents last season, Old Bradwell.