Irish fail to make late chances count as the home side hold on for a draw...

MK Irish couldn’t make their man advantage in the second half count on Saturday afternoon as they drew 1-1 away to Stotfold.

A tight first half in tough, swirling wind conditions, neither side could break the deadlock and the most important moment came right at the end, as Stotfold were reduced to ten men just before the break.

Irish had every right to be confident as the second half began, and the game did swing in the away side’s favour as they pressured well and scored the opener just after the hour mark, through Vinny Shrieves.

Less than ten minutes later though, Stotfold got themselves back on level terms with a well-placed header into the top corner from a free kick.

As the home side’s ten men began to tire towards the end of the game, the space began to open up and Irish had countless attacks in pursuit of a winning goal but couldn’t make the pressure tell as the teams shared the points.

After a disappointing midweek defeat against Ampthill, Saturday’s trip to Stotfold presented a chance to bounce back and claim our first points in the league this season. The conditions were difficult despite the high standard of Stotfold’s ground, and a decent sized crowd was in attendance – which could have been even bigger if Stotfold had announced the match wasn’t in fact behind closed doors earlier than less than two hours before kick-off.

Irish struggled to get a hold of the ball in the opening stages, with Stotfold having the lion’s share of possession as they were patient in their build up play from the back.

Despite struggling for possession, it was MK Irish who had the first chance of the game, Mason Spence capitilising on a defensive mix up after a hopeful ball forward and driving on to shoot from the edge of the box, however his underpowered effort wasn’t troubling the Stotfold keeper.

The home sides first significant foray forward came down the right-hand side, as their striker picked up the ball and cut inside before drawing a wonderful save from Owusu, who stopped it from curling into the top corner, touching it just wide.

The first half was a more than scrappy affair, so it wasn’t too much of a surprise that the closest either side came to a opener was from a set-piece. Taking the corner from the the right was Spence, who clipped it in around the penalty spot where Christian Beaupierre met it with a header that went just wide.

Right on the stroke of half time, Stotfold appeared to shoot themselves in the foot after what had been a close game, as one of their players kicked out at Ryan Coyle off the ball. It was a moment of madness that perhaps stopped his team from being able to go after the three points, as the referee rightly showed him a straight red card.

As the second half began it was important that Irish made our man advantage count as soon as possible, in what was now a fantastic chance to claim our first three points of the season.

The contrast in ball possession was clear to see in the opening stages of the second half, as Irish started to press higher and have meaningful attacks that were lacking in the first.

Fifteen minutes in and the away side finally got the game’s first goal. In line with a scrappy game, was a scrappy goal that came through Vinny Shrieves. A ball in from the left led to a pinball scene in the six yard box, eventually dropping to Shrieves who stooped to head it on to the underside of the crossbar, where it was judged to have just about gone over the line. There was some confusion before the decision was made, with the game briefly playing on before the referee signalled to give the goal.

In a game that was becoming tenser by the minute, with Stotfold fired up from the red card and individual battles popping up all over the pitch, the moment MK Irish dreaded arrived after 74 minutes. Stotfold waited what seemed like an age to take a free kick from out on the right, after the referee had to calm down several scuffles, an outswinger came in that was headed fantastically well, across Owusu and into the top corner, leaving the keeper no chance and making the score 1-1.

Scott Dummett went close to restoring the Irish lead, in very similar fashion to Stotfold’s equaliser. Spence crossed in from a free kick on the right, looking for the big men forward from the back and if Dummett had got any more pace on his headed effort he would have seen it nestle in the bottom corner.

With Irish pressing hard as the home side sat back to protect the point they sensed, Spence almost got himself on the scoresheet after George Shrieves drove well down the right, reaching the byline and cutting bac for Spence, who could only direct his shot at the keeper.

As time was running out there was one more chance for the away side, and it was roles reversed as George Shrieves nearly won the game in spectacular fashion. Spence was played in down the left and beat his man, then cut back for an onrushing Shrieves on the edge of the area, who smashed it just over the bar.

Following that, there was barely any time left for the resulting goal kick as the referee called it to a halt at 1-1, leaving Irish players scratching their heads at how they hadn’t managed to find a winner. 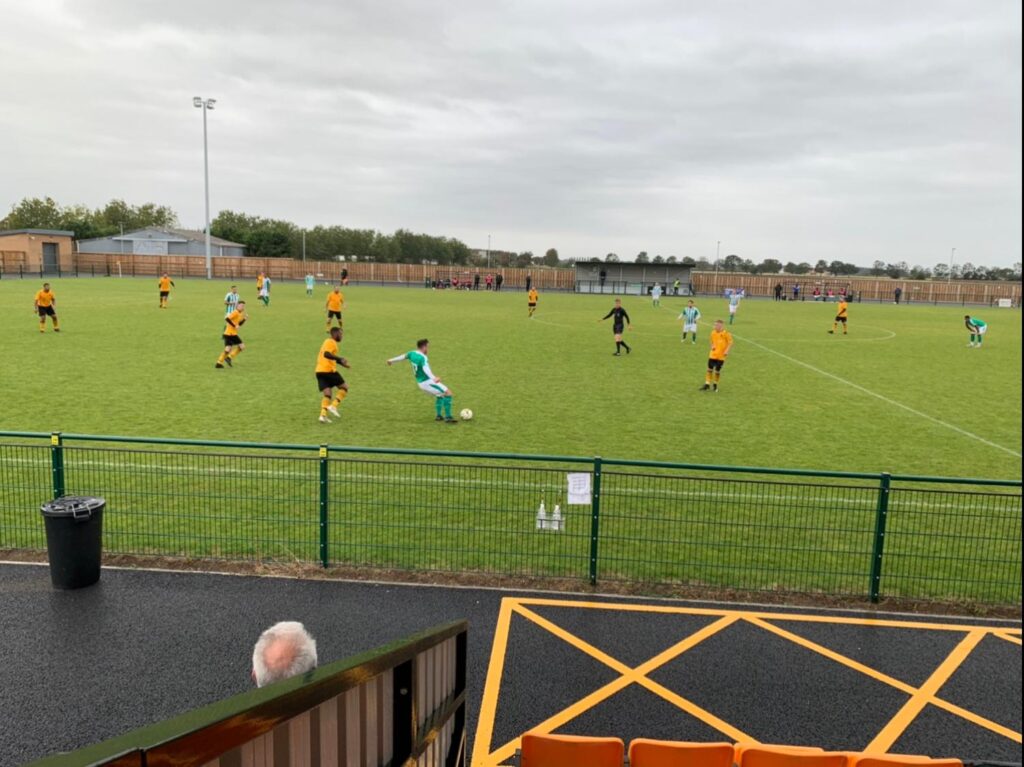 It’s a game that will be looked at as two points dropped by Terry Shrieves and his players, after multiple chances towards the end of the game to claim the first league win of the season.

The upcoming week presents another two games for MK Irish, who travel to Rayners Lane on Tuesday in league action, before a home game at The Irish Centre against Amersham on Saturday.

Any cookies that may not be particularly necessary for the website to function and is used specifically to collect user personal data via analytics, ads, other embedded contents are termed as non-necessary cookies. It is mandatory to procure user consent prior to running these cookies on your website.